So it's the end of a busy week. Next week is the last week of Ulpan. I have enjoyed all the Hebrew studying, but I am definitely ready to start classes for real. The week has been kind of a mush. I will try and sort out some of the highlights/interesting things for you.

Sooo I passed my trope/cantellation test! This means I can chant Torah wooo. Most people are taking the test after the high holidays, but I just wanted to get it over with. We finished the class last week also, and while sometimes it was frustrating to be in class for so long after Ulpan, i'm glad I can finally chant Torah. I feel like it is something I should have been able to do years ago. But hey, better late than never :-) Now I just have to learn haftarah trope, oh and the special high holidays trope, and the megillot...simple (not).

What else...The Ellensons are here this week. Rabbi David Ellenson is the president of HUC so it's kindof a big deal. Anyways he gave a really interesting talk about being a rabbi. That was a horrible description of what it was about...But anyways he spoke about who we need to be and what we need to have as future rabbis/educators/cantors. We need to be "marbitz torah" to be spreaders of Torah.

One aspect of his talk that I liked was when he cited a piece from the tradition that asks why is Moses (aka the moses of exodus) called Moshe rabbeinu (moses our rabbi/teacher) and not Moshe ha'navi (Moses the prophet). He said it was because as a prophet all you need to do is speak the truth, but as a rabbi/teacher you need to also inspire people. Moses had to tell the Israelites what God was telling him and also inspire them to act, and to follow him through the desert. As Rabbis we can't just spout Torah knowledge and expect people to listen and connect. We have to give them our knowledge and teach them about Judaism in a way that they can relate to and it is our job to make sure we do that. This also goes along with having empathy (which Rabbi Ellenson said it was also important to have).

Good talk, good talk. He also brought up an issue for us of what does it mean to be "wrong" do we have a right to tell people they are wrong? If so who? Obviously as Reform Jews going towards the rabbinate we believe that Reform Judaism is right, but is it exclusively right? Is it more right than other forms of Judaism (or is it maybe just more right for us)? I'm not going to say my opinions on this, but I just thought it was something interesting to think about. Also regardless of what you think if something is wrong or not it is still important to be tolerant. This whole discussion also leads into ideas of tolerance vs. pluralism. I'm in rab school ok, this is what we talk about :-)

What else...we had a presentation on Wednesday about this thing called the Jewish Studies Portal which is this thing we have access to as students of HUC where we can go on and get all these awesome sources. So it was supposed to be a technology demonstration, but then he couldn't get the technology to work. Good times.

After this presentation all of the women rabbinical students has a meeting with Rabbi Jackie Ellenson who is head of the Women's Rabbinic Network. We spoke about what the organization does and how they support women rabbis. It sound pretty sweet. Also I found out L.A is a pretty woman centric campus, meaning that many of the higher ups are women, so I think that will be cool to experience next year.

Last night (weds) a bunch of classmates went to the beer festival in Jerusalem. It was super fun. We can be a pretty goofy bunch sometimes, but it's nice to be able to relax and de-str 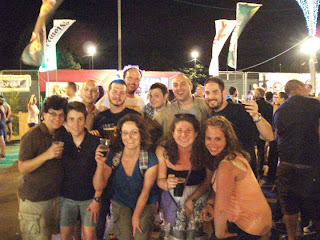 ess and not have to act like rabbis all the time. (Of course there are boundaries and I know I still am representing HUC and future rabbis, but you know. maybe.). Anyways it was a good time, I learned that I like wheat beer, I had one that I really liked but I don't remember the name so fail. I also had cherry beer. It was weird, quite the girly beer haha. Look, I put up a picture from the beer fest. Here is me with some of my classmates (notice my impeccable form on the sorority squat).

Today we had our academic orientation and we got to see our schedules for the coming year. Let me tell you, they are PACKED. It's gonna be crazy, but I'm looking forward to it. Since I am in the highest hebrew level I get to be in a Jewish Thought class taught all in Hebrew by a professor who was highly recommended. I will also be taking some other classes in Hebrew, like bible. So yeah I'm pumped, I want to practice my Hebrew and learn Jewish things and be super cool/stressed out.

Also I was introduced to a funny website: http://www.dearblankpleaseblank.com/hilarious.php
Check it out.

Also shout out to my followers. What whattttttt, and also to my readers. It really means a lot when you tell me you read my blog/enjoy it. I try to be honest and not boring. I know I ramble sometimes, but I mean as a future rabbi I think that is to be expected :-P