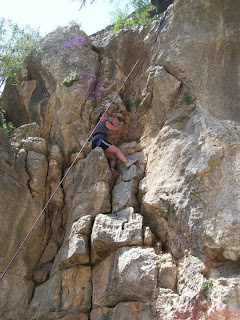 Hey World,
Fridays have taken on a new meaning for me here in Jerusalem. Friday is my one day to sleep in and to get everything done that I couldn't do during the week, it's kind of like an American Sunday except that on top of getting everything done you have to also get ready for shabbat. Since I've started keeping shabbat it really forces me to be deliberate in my shabbat preparations. I like it. I have to preplan where and when I am meeting people, like the days without cellphones or I will leave parts of my day open for spontaneous plans with people I run into,which is also really nice. I am forced to think about shabbat and get fully ready before it starts. Fridays are never long enough here, but I appreciate every minute of them (especially the ones I spend asleep haha).
Fridays have also become my shuk day, so every friday afternoon I head out to machaneh yehuda to buy fruits and veggies and sometimes other food items too. It is crazy crowded on fridays because everyone is doing their pre-shabbat shopping, but I kinda like it. It's fun to people watch, and it kinda feels like I'm back in NYC. A little advice though, BRING water with you and drink it. You will be a lot happier. Also don't be afraid to push people out of the way, that just seems to be a fact of life in Israel (but don't hurt them, just be gentle).
One tradition I have started with myself is after the shuk I always go to marzipan and get an iced coffee, I read about it in some other blog and had to try it for myself, and it's darn good and only 5 sheks! If you are in the area and have never been to marzipan before make sure you try their rugelah, soooooooo goooooooooddddddddd.
Yesterday (Thursday) was a fun day. During the summer we don't have formal class on Thursdays and instead we have trip days designed to help us experience different parts of Jerusalem/Israel. This past Thursday we had a few different options to choose from and I ended up with 10 other people in the "Jerusalem stones" group. It was super fun! We did a little text study and then we rock climbed. I had never climbed on actual rocks before (I had only climbed up the fake rock climbing walls) so that was great. I almost made it to the top, but as some one in our group said: "everyone makes it to the top because the top is different for everyone." Yeah obviously a former camp counselor. So I guess I made it to my top haha, but I was proud of myself and it was a great bonding experience. (Photo cred goes to Tina, and for the record I made it a bit higher after that picture).
That night we celebrated the birthdays of two of my classmates. That was fun too, there was a HUGE group of HUCers out on ben yehuda. We probably seemed like a birthright group, but we are NOT. Also I realized that even though I order goldstar most of the time I really don't like it, I think I just try to like it because it's Israeli beer.
Well I should get going and finish my shabbat preparations. I'm excited for tonight, I'm going to shira hadasha which is self described as an orthodox, feminist congregation. This place is also special to me because it is the first place I ever experienced the carlebach style kabbalat shabbat (think: lots of singing in hebrew) which I have really come to love. I haven't been there since high school, so this should be interesting.
Shabbat shalom and happy weekend :-)
Posted by Becca at 2:58 PM